In VerbaAlpina, we bring together very different sources. On the one hand, we are dealing with already published sources (atlases, dictionaries, monographs of single places) and with new sources, which have been exploited by the project itself for the first time, on the other hand. Part of these new data are collected by member of staffs, e.g. by Beatrice Colcuc, partly the crowd, i.e. individual and not personally known speakers, contributes these new data. For VerbaAlpina, only sources which deliver already geocoded or at least geocodable linguistic data, are worthy of consideration. These data, however, have to be treated systematically in a different way against the background of the typification. Utterances which are phonetically exactly transcribed are marked as "single attestation" by VerbaAlpina. It makes sense to group these single attestations according to certain criteria ('to type'). Data which the source offers in orthographic form is regarded as alredy typed: this form of notation

The Alps have been an area of diverse language contacts since prehistoric times, which result from completely different strata constellations (cf. Krefeld 2003). In principle, languages which are in contact in an area because there are (more or less) bilingual speakers or even speaker communities are called adstrata. If a basic type is only spread in one specific area, so e.g. in the Alps, and is not present in the relative language families, the borrowing direction and the language of origin is often not clear (cf. the basic type rom. baita / German Beiz, Beisl).
If the language of origin of the borrowing is not longer spoken in the distribution area (or in a part of it), there are two possible constellations. 1) In the case of substratum the language of origin (substratum language) had been spoken in the distribution area before its tradition continuity finished and the actual language started to prevail. Romance is a substratum language of the whole German- and Slovenian-speaking Alpine region. Substratum words presuppose language change. Nevertheless, they often are characterised by extraordinary regional or local continuity.
2) In the case of superstratum, the language of origin has been used over a certain period of time in the distribution area without becoming established permanently. So, in parts of the Alpine region where today Romance languages are spoken Germanic superstrata (Gothic, Lombardic) prevailed temporarily after the collapse of the Roman infrastructure. And in Slovenia, German had the same role during the Habsburg period.
Quite different scenarios took place for the three language families. With regard to the importance of language contact for the history of the language area, it is important to consider the sequence of the borrowing: are Romance loanwords in the Germanic and the Slavonic language area substratum words with regional tradition continuity since Antiquity or are they more recent borrowings due to adstratum? The same question has to be asked – mutatis mutandis – for the German loanwords in the Romance-speaking area and the Slavonic loanwords in the German-speaking area. 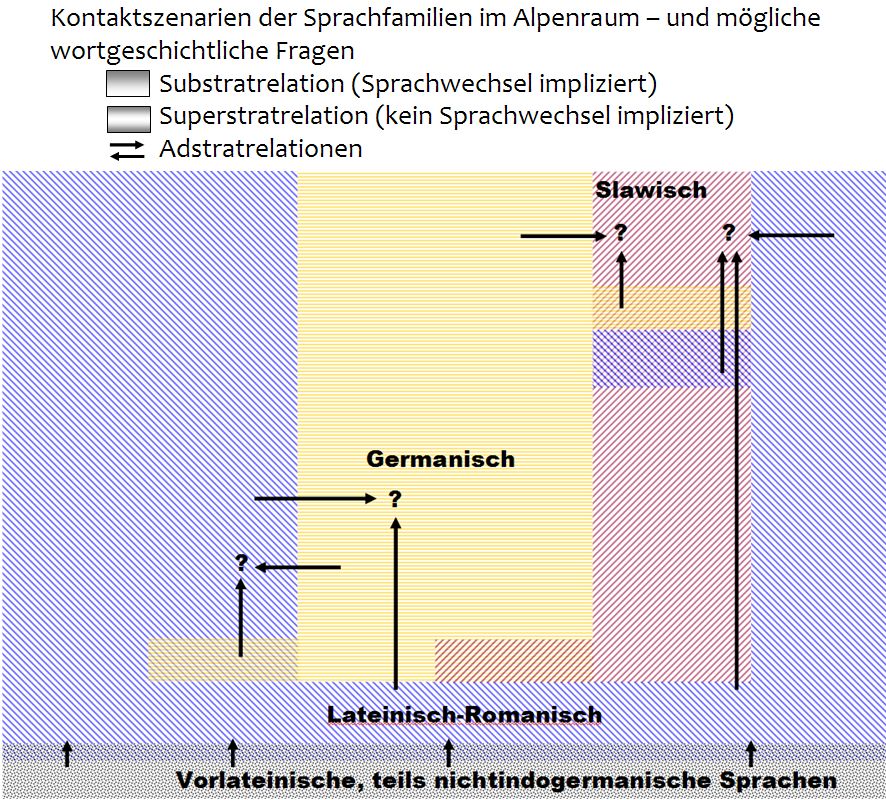 This function allows the users to select among the present single maps and fix them on synoptic combination maps according to their own interests. So, the spreading areas of any linguistic and extralinguistic feature can be visualised in connection with each other. At the same time, there is the possibility to fix these synoptic maps in zoom levels when a local context shall be demonstrated, as e.g. the [Karwendel|Karte:Karwendel]] or the dialectal continuum between Occitan, Franco-Provençal and Piedmontese in the Western Alps.