The dimensions of knowledge that are in the horizon of VerbaAlpina in terms of content, i.e. THINGS, CONCEPTS and WORDS, are often combined with each other very closely and in a very unclear way. An example is the case of the map 1192a in the AIS, LA CASCINA DI MONTAGNA. The title of the map has the status of a concept, namely BUILDING, “wo ein gut ausgebildeter Käser (‘Senn’) mit Hilfspersonal die Milch sachgemäss zu Käse, Butter, Zieger verarbeitet” (translation: where a well trained cheesemaker ('Alpine dairyman') makes milk into cheese, butter, fromage frais properly with ancillary staff). Furthermore, the title of the map is a generic term as well as some chalets serve as storeroom for milk and cheese, whereas in other cases there are special cellars for milk and cheese for this purpose. These cellars can be an annexe or separate buildings through which very often a watercourse flows. Besides, one has to distinguish between the "meist massive steinerne Sennhütte" (translation: the mostly solid stone chalet) and the wooden chalet etc. There is, in other words, a whole typology of subordinate and more specific concepts and it is not always clear in detail which hut is meant by which word on the map. The concept in the map title is often underspecified; the existence of other designations for more specific kinds of huts cannot be excluded for any place. In fact, dialect dictionaries confirm this impression regularly. At the same time, other concepts as MILK CELLAR and CHEESE CELLAR which are no subordinated terms of CHALET come into play. A third concept turns up as well: terms for stalls for different animals, also for pigs, appear frequently in the legend of the same map. Designations for these additional concepts are as a rule not recorded in the topographic map, but in the margin in form of lists that mostly show only few attestations for a few places. At the same time, there are often polysemous words in the lists that denote completely different concepts in the individual places. The type kort, e.g., occurs in the list for the concept ALPINE STALL at the places 107 and 109 of AIS; however, one of the attestations (place 109) denotes a totally different concept, namely the open RESTING AND MILKING PLACE FOR LIVESTOCK NEAR THE ALPINE HUT. 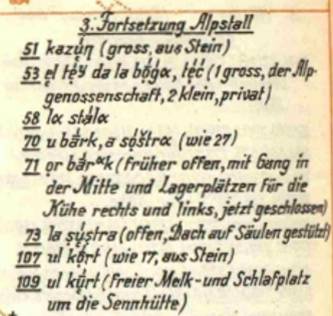 Inconsistencies of this kind absolutely have to be eliminated when digitally taking data into the database. It is an overriding principle to separate the mentioned dimension with regard to content, as it were, to deconstruct the presented information systematically. 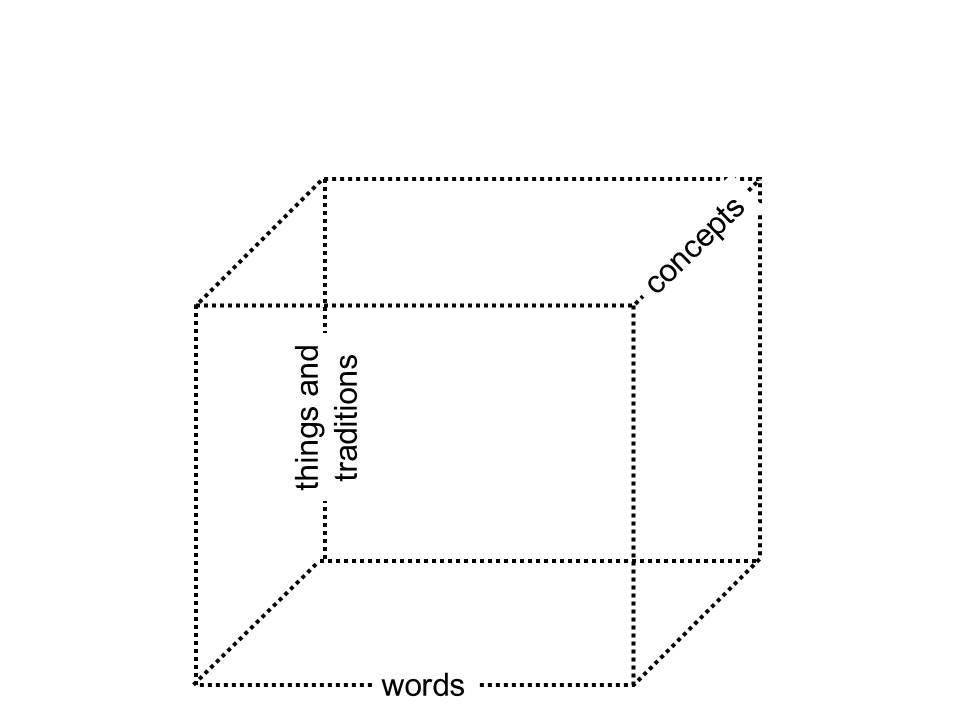 After that, all information can be retrieved and visualised from the database in consistent categories and in almost any combination.

No full and coherent history of the Alps has been presented until now ("Eine umfassende und kohärente Geschichte der Alpen wurde bisher noch nicht vorgelegt", http://www.hls-dhs-dss.ch/textes/d/D8569.php); rather different, physiogeographical and economical-political definitions of the Alps are competing with each other ("naturräumliche" und "wirtschaftlich-politische Alpendefinitionen", Bätzing 1997, 23 f.). In the sense of a transparent and pragmatic definition, the area under investigation of this project has been equated with the clearly defined purview of the Alpine Convention. The inconsistencies between the member states ("Inkonsistenzen zwischen den Mitgliedstaaten", Bätzing 1997, 31)) which are defined in this treaty have been accepted by VerbaAlpina. They regard the Bavarian foothills of the Alps (included), larger areas at the edge of the Alps as the Emmental or the Zürcher Oberland ("größere randalpine Gebiete wie das Emmental oder das Zürcher Oberland", Bätzing 1997, 32), excluded) as well as some more important cities at the edge of the Alps: Lucerne and Salzburg are included, but Graz and Biella are excluded. The perimeter of the Alpine Convention can be downloaded here. The real aim of the project is, however, to record the Alps as linguistic-cultural area within this formally defined frame and to depict the similarity of the places belonging to the Alps.
Bätzing, Werner (1997): Kleines Alpen-Lexikon. Umwelt - Wirtschaft - Kultur, München, Beck