The project focusses on the Alps as a sole complex regarding the cultural area. It starts from the expectation of common cultural techniques in the whole Alpine region. The adaptation to identical or at least very similar life conditions in the high mountains and with that to the natural spreading of corresponding skills and traditions serves as a basis for this expectation. This common ground becomes manifest linguistically in corresponding designations. Therefore, it is not appropriate to describe the Alpine material culture so to speak top-down in the constricted frame of single language communities (by means of a fix network of survey places in language or dialect regions determined a priori). This approach is mostly a dialectological one aiming at a description as complete as possible of single regions and ideally specific varieties. The perspective of VerbaAlpina, however, exceeds linguistic boundaries and can be called [interlingual linguistic geography]]. In this perspective, diffusion areas of cultural traditions and their linguistic designations shall be uncovered bottom-up, i.e. by accumulating as many local results as possible in an inductive way.
In order to so, VerbaAlpina works exclusively with geocodifiable data and does not specify any extensive categories – apart from the fact that the places belong to the Alpine Convention. Extralinguistic data can help to contribute to making the Alpine region's mark as cultural space in case they provide actual or historical information about the social organisation of the inhabitants and/or the opening up by infrastructure and the cultivation of the region. Regarding the historical reconstruction of the Alpine cultural environment it is worth striving for the comparison of areas marked by archaeological persistence with areas of linguistic relics and for the quantitative visualisation of this comparison in the form of a combined mapping; cf. for this Häuber/Schütz 2004a from a general archaeological point of view and the from a more specific point of view the model Cologne city layer atlas (cf. Häuber/Schütz/Spiegel 1999 and Häuber u.a. 2004).
Eintrag nicht gefunden
Häuber, Chrystina/ Schütz, Franz-Xaver/ Spiegel, Maria Elisabeth (1999): Die Entwicklung des Informationssystems Digitaler Archäologischer Schichtenatlas Köln, Aachen, in: Jakobs, Kai/ Kleefeld, Klaus-Dieter (Hrsg.): Informationssysteme für die Angewandte Historische Geographie, RWTH, Lehrstuhl für Informatik
Häuber, Chrystina (2004): Das Informationssystem Digitaler Archäologischer Schichtenatlas Köln, Essen, in: Horn, Heinz Günter u.a.: Stadtentwicklung und Archäologie, Klartext

The expression informant is used technically by VerbaAlpina: it unites two different things depending on the source. In the linguistic atlases, as a rule all linguistic data are transparent up to and including the speaker. In the database, these informants can be identified by an individual number (ID). They are furthermore chronocoded by the year of the data collection and geocoded by the place of the data collection. In geocodifiable dictionaries in comparison it is – as a rule – impossible to identify concrete speakers. However, VerbaAlpina assigns fictitious informants to this kind of sources too because of reasons due to the database. Each informant is assigned to a language family. This language assignment passes from the informant himself to all other linguistic data deriving from him.

VerbaAlpina uses exclusively data that are geocodifiable at least in the area of a municipality, if possible, however, even more precisely (as e.g. photographs of mountain pastures). Regarding the particularly interesting linguistic data, there are two types of data: 1) data that stem back to utterances of single informants as e.g. the attestations of some (especially Romance) linguistic atlases or also of the Bayerische Dialektdatenbank (BayDat). These utterances are decomposed in their constitutive elements, the so-called tokens. 2) data from some atlases as e.g. the SDS or the VALTS and all dictionaries. These do not offer any speakers' utterances, but forms that already have been typed. Thus it is not possible to get the single tokens.
Baumgartner, Heinrich/ Handschuh, Doris/ Hotzenköcherle, Rudolf (1962-2003): Sprachatlas der Deutschen Schweiz, Bern, vol. 1-9, Francke
Gabriel, Eugen (1985-2004): Vorarlberger Sprachatlas mit Einschluss des Fürstentums Liechtenstein, Westtirols und des Allgäus , vol. 1-5, Bregenz, vol. 1-5, Vorarlberger Landesbibliothek
Bayerische Dialektdatenbank
Sprachatlas der deutschen Schweiz
Voralberger Sprachatlas

It is one of the aims of this portal to bring out the forming power of language contact and especially its ethnolinguistic conditioning in the development of the Alpine language area. The conception of the database will allow depicting the recorded loan words also quantitatively in their local accumulation. For they result automatically when the affiliation of the informant to one of the three language families does not match the affiliation of the etymon. There are three language families that form the modern Alpine region in the form of dialect continua, which are of different size and especially of different degrees of distinction. The distribution areas of the three language families cannot be depicted on specific states cf. actual language areas. Germanic is represented by Alemannic and Bavarian varieties which are part of the pluricentric German language. The common reference to the Swiss, German and Austrian standard variety is, however, not longer given for some of the Walser and Old Bavarian (Cimbrian) language islands in the Southern Alps. Unlike the German-speaking area the varieties of the Romance continuum can be classified as belonging to several languages. Besides French and Italian, it is about – in accordance with the political recognition in Switzerland and Italy – Occitan, Franco-Provençal, Romansh, Ladin and Friulian. The Slavonic language family is represented by Slovenian dialects that are spoken in Slovenia, but also in several Italian and Austrian municipalities. It is not the aim of VerbaAlpina to describe the dialects in the Alpine area as completely as possible, to bring out the local or regional dialect borders and to represent the region as a jigsaw of varieties. Thanks to its extensive conception, the goal of VerbaAlpina is rather to make distinguishable the (especially lexical) features which are spread over the single dialect and language borders. By doing so, the ethnolinguistic common ground will become evident. 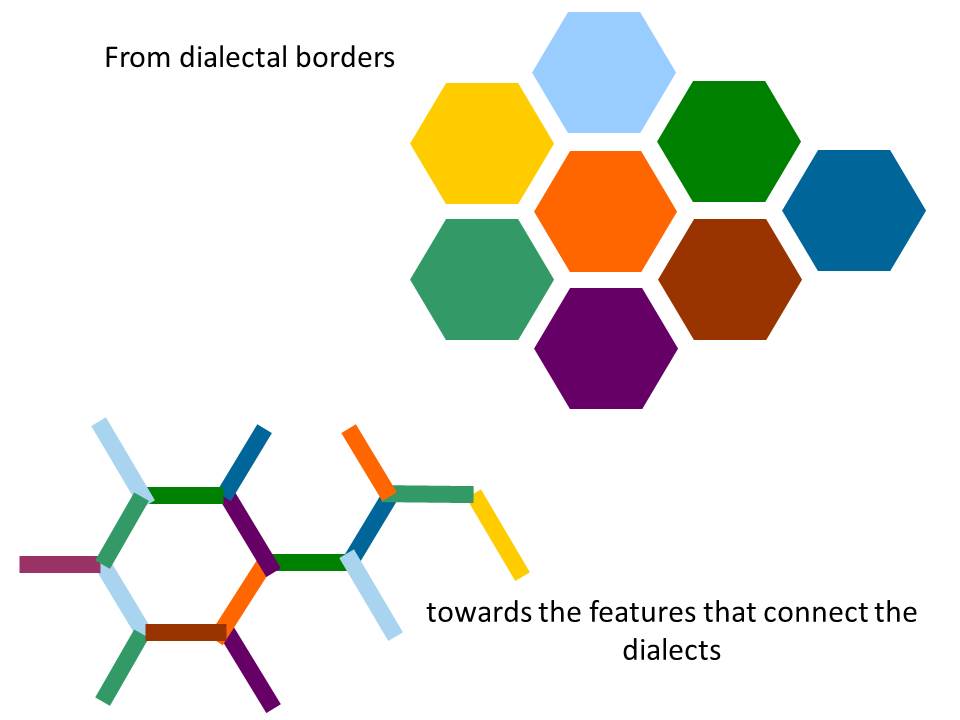 Dialects form complete linguistic systems. This means that, when investigating these three "genetically" different continua jointly, language contact is studied in form of an interlingual geolinguistic.