By 'designation', VerbaAlpina understands the idealised instance of a written, a spoken or a thought word that denotes one or several concepts and possibly references concrete things. Instead of a single word a specific sequence of several words can take over these functions (the so-called Multi-word expression). Regarding the category 'concept', a so-called m:n-relation is given speaking in terms of computer science: A polysemous designation can denote several concepts, the other way round a concept can be denoted by a multitude of synonymous designations. 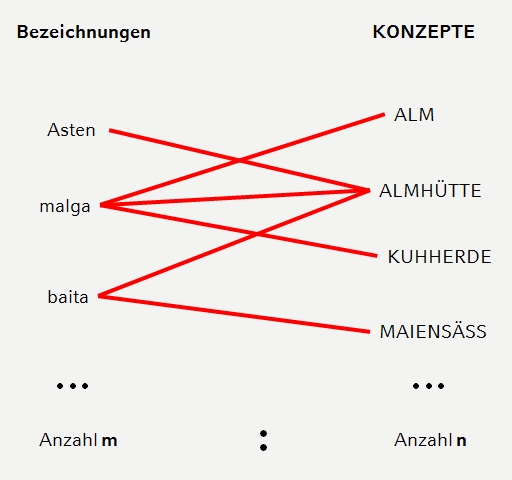 The project VerbaAlpina has been planned from the beginning with regard to suitability for the web as it wants to contribute to the transferring of established arts traditions (more precisely of geolinguistics), to the digital humanities.
This means as follows:
(1) The empirical basis of the research consists in data (cf. Schöch 2013), e.g. in digitally codified and structured units or at least in units that can be structured. The data the project is dealing with are partly already published data which are digitised secondarily (as e.g. the older material out of atlases), but partly also new data which still have to be collected. With regard to the relevant concepts the new data shall be as extensive as possible. Therefore, the method is quantitative and to a great extent inductive.
(2) The research communication takes place on the medial conditions of the internet. This allows to intertwine hypertextually different media (writing, picture, video and sound). Furthermore, the persons who are participating in the project either as researchers (especially as project partner) and/or as informants can communicate and cooperate with each other continuously.
(3) The interested researchers are offered to collaborate on the development of this collaborative research platform based on the project. This perspective is useful and gets the project further at least in two respects: it permits to integrate different sites and to make progress with the combination of information technology and linguistic geography by using public resources, i.e. without being forced to fall back upon the (legally and economically difficult) support of private IT companies.
(4) The knowledge which is relevant for the project can also continuously be accumulated and modified for a fairly long time although the guarantee of a lasting availability is still difficult to realise technically (cf. to this the important research infrastructure of CLARIN-D http://www.clarin-d.de/en/). Anyhow, the publication of the results on real media (books, CDs, DVDs) is no fundamental request anymore. Nevertheless, a secondary print option is set up, a solution the online lexicography offers occasionally, as e.g. the exemplary Tesoro della Lingua Italiana delle Origini.
Schöch, Christoph (2013): Big? Smart? Clean? Messy? Data in the Humanities, in Journal of Digital Humanities, 2-13

Within the context of VerbaAlpina, the term digitisation> is not only used to describe the simple use of computers for electronic data processing. The term describes essentially the digital deep development of the material by *structuring* it systematically and transparently and by categorising it. 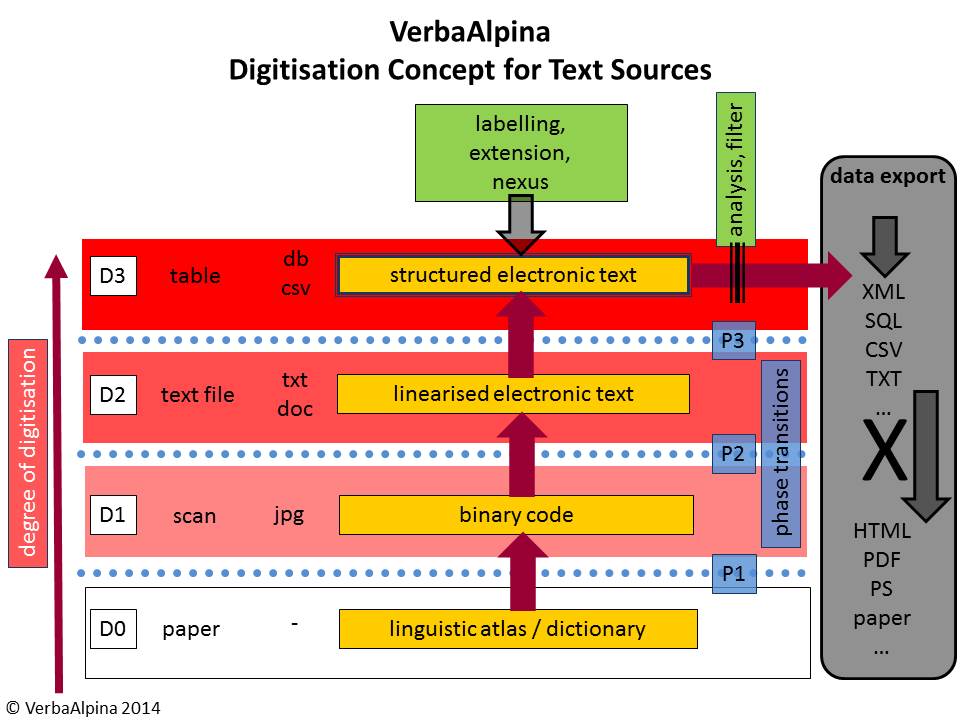 VerbaAlpina works almost exclusively with the relational data model which organises the data material in principle in the form of tables. The tables consist in rows (= data sets, tuples) and columns (= attributes, fields, properties). Every table can be widened by additional rows and columns in every direction. Between the tables, there are logical relations which allow coherent nexus and corresponding synoptic depictions (the so-called "joins") of two or more tables. At the moment, VerbaAlpina uses the database management system MySQL for the management of the tables. However, the tables are not bound to this system, but can be exported at any time, for example in the form of text with separators that have to be defined unambiguously both for field and data set limits; they are exported together with the row names and the documentation of the logical relations (entity-relationship model). The XML structure that is often used at the moment is not used in the operational activities of VerbaAlpina. But XML is anchored as export format within the interface concept.

Besides the logical structuring of data, the coding of the characters is the second important concept in connection with the term "digitisation". The right handling of this topic is of fundamental importance with regard to the long-term filing of the data material. As far as possible, VerbaAlpina gets its bearings by the encoding table and the guidelines of the Unicode Consortium. In the case of the digitisation of characters that have not been included yet in the Unicode table the digital data capture of a single character takes primarily place by serialisation choosing a sequence of characters out of the Unicode code space x21 to x7E (within the ASCII range). The corresponding allocations are documented in special tables; this procedure allows a conversion in Unicode values which possibly will be available at a later date.
American Standard Code for Information Interchange